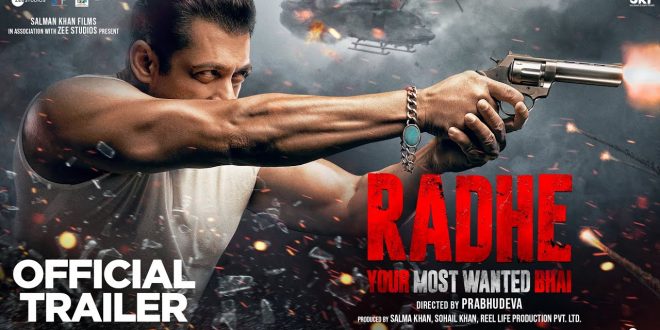 The most awaited trailer of “Radhe” with Salman Khan in the lead role has been revealed. Set against the backdrop of Mumbai, the city is ravaged by drugs and the crime mafia. Mumbai police are doing their best, but there is not enough rope in the specialized policeman, Salman, who is Radhe.

With 97 meetings, Salman has his own way of dealing with bad guys. While he is accused of taking drugs and the crime mafia, Salman chases them all away. Randeep Hooda plays the main antagonist, and the trailer is full of action episodes and dialogues by Salman Khan.

The love angle with hottie Disha Patani seems a bit strange, but the surprise is that the song “Seetimaar” from “Duvvada Jagannadh” by Allu Arjun is reused in this film. Obviously it will be Disha’s show in the song.

“Radhe” is directed by Prabhudeva and is his third film with Salman Khan. Although the story and the treatment are dated, in the end it is Salman Khan.

The film will be released in theaters on May 13of and simultaneously a pay-per-view digital launch. This is the first big Bollywood release after the pandemic and in the middle of the second wave. Expectations are high for “Radhe”, and Bhai’s fans are looking forward to it.