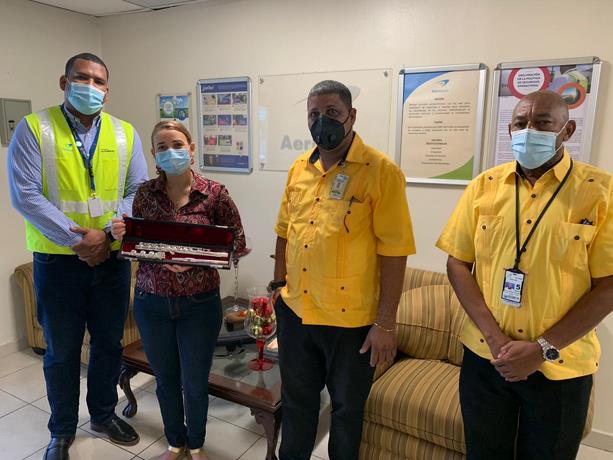 A taxi driver of the Union of Drivers of the International Airport of Las Americas, José Francisco Peña Gómez (SICHALA), He returned a flute that a music teacher had reported missing.

Humberto Luna explained that he had stowed the instrument on top of a luggage cart in the vehicle’s parking lot., which had apparently been forgotten by Esmeralda Comprés de Tejada.

The taxi driver indicated that as soon as he found the whistle, he contacted the directors of the airport administrators’ association to return it to the owner.

Compres de Tejada thanked the driver and stressed his seriousness, honesty and good decision to return the instrument he bought for one of his daughters who is studying musica.

“I would like to thank Mr. Humberto Luna and also Johnny Viloria, Corporate Security Manager of this company Aeropuertos Dominicanos XXI, Aerodom, for the great effort they have put into the business and also for their kind attention to me,” said the lady.

Humberto Luna has been working as a taxi driver at AILA for more than 10 years.

Professor Comprés de Tejada returned to the country last weekend on a commercial flight with the airline Spirit Airlines, from Miami, USA.

Last weekend, the LISTIN DIARIO echoed the information, publishing the teacher’s complaint that she had lost the instrument when she arrived in the country through this terminal.