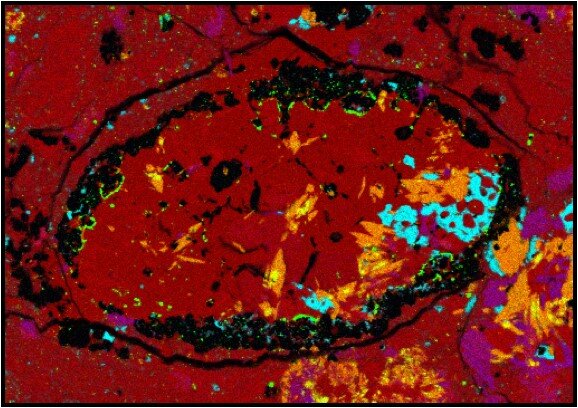 A team of scientists led by the Southwest Research Institute has identified a parent asteroid with potential new meteorite by studying a small fragment of a meteorite that arrived on Earth a dozen years ago. The composition of a piece of the Almahata Sitta (AhS) meteorite indicates that its parent body was an asteroid about the size of Ceres, the largest object in the main asteroid belt and formed in the presence of water at intermediate temperatures and pressures.

“Carbonic chondrite (CC) meteorites record geological activity in the early stages of the solar system and provide insight into the history of the parent body,” said Dr. Vicky Hamilton, a SwRI staff scientist, the first author of a paper published in Nature Astronomy outlining this research. “Some of these meteorites are dominated by minerals that provide evidence of exposure to water at low temperatures and pressures. The composition of other meteorites indicates heating in the absence of water. Evidence of metamorphism in the presence of water in intermediate conditions has been virtually absent so far.”

Asteroids – and meteors and meteorites that sometimes come from them – are remnants of the formation of our Solar System 4.6 billion years ago. Most live in the main asteroid belt between the orbits of Mars and Jupiter, but collisions and other events have broken them and expelled debris into the inner solar system. In 2008, a 9-ton diameter asteroid with a diameter of 13 feet entered the Earth’s atmosphere, exploding in about 600 meteorites over Sudan. This was the first time that scientists predicted an asteroid impact before entering and allowed the recovery of 23 kilograms of samples.

“We were assigned a 50 milligram sample of AhS for the study,” Hamilton said. “I mounted and polished the small fragment and used an infrared microscope to examine its composition. Spectral analysis identified a range of hydrated minerals, especially amphibole, that indicate intermediate temperatures and pressures and a prolonged period of aqueous alteration on a parent asteroid at least 400 and up to 1,100 miles in diameter. “

Amphiboles are rare in CC meteorites, being identified only previously as a component of traces in the Allende meteorite. “AhS is a serendipitous source of information about early solar system materials that are not represented by CC meteorites in our collections,” Hamilton said.

Orbital spectroscopy of the Ryugu and Bennu asteroids visited by Japanese spacecraft Hayabusa2 and NASA OSIRIS-REx this year is consistent with aqueously altered CC meteorites and suggests that both asteroids differ from the best-known meteorites in their hydration status. and evidence for large-scale hydrothermal temperature processes. These missions collected evidence from the surfaces of asteroids to return to Earth.

“If the compositions of the Hayabusa2 and OSIRIS-REx samples differ from what we have in our meteorite collections, it could mean that their physical properties cause them not to survive the processes of ejection, transit and entry through the Earth’s atmosphere, at least in their original geological context. “However, we believe that there are more carbonic chondritic materials in the solar system than are represented by our meteorite collections,” said Hamilton, who is also part of the OSIRIS-REx scientific team.

Provided by the Southwest Research Institute