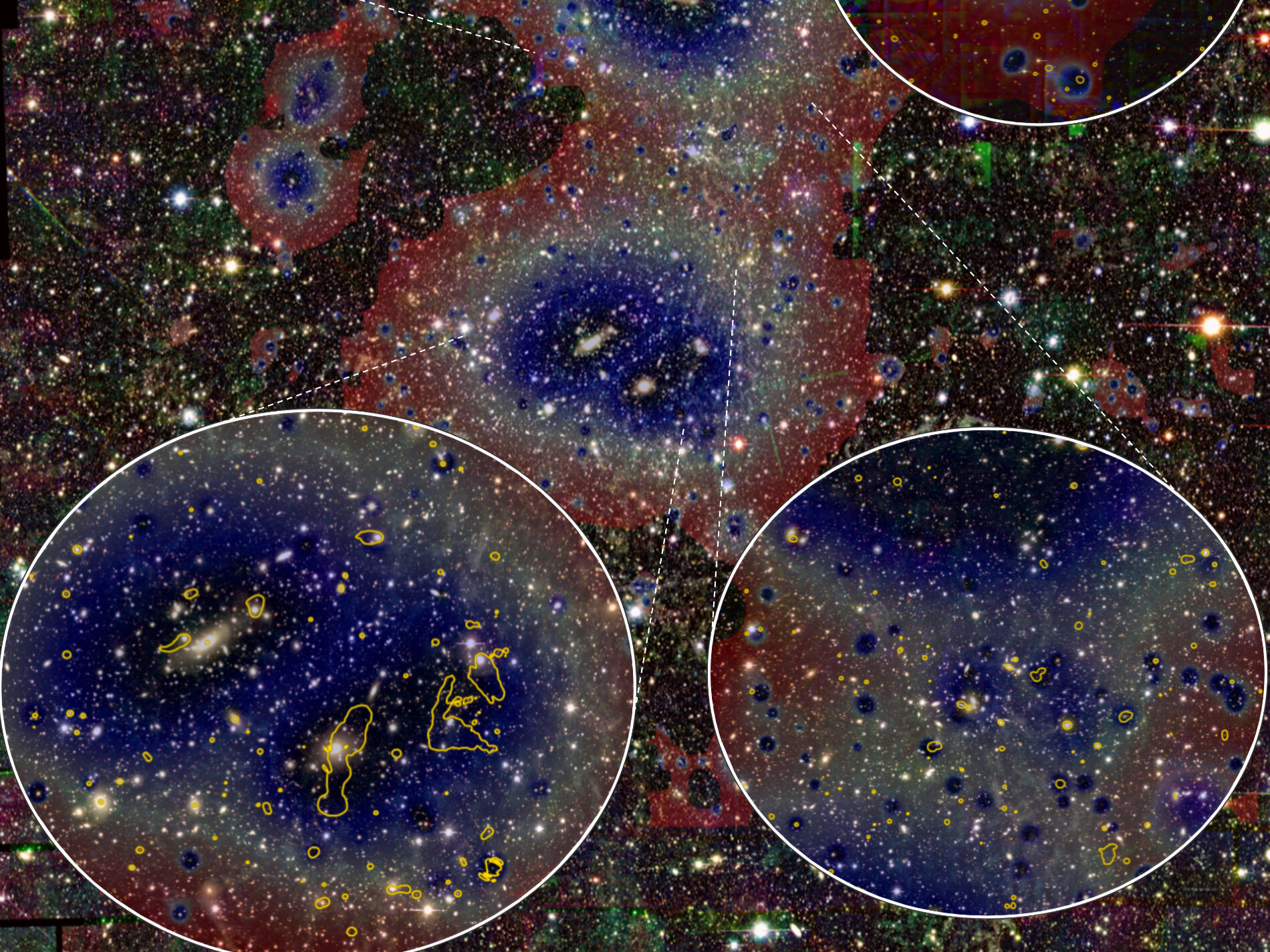 More than half of the matter in our universe has so far remained hidden from us. However, astrophysicists had a hunch where they might be: in so-called filaments, unfathomable wire-like hot gas structures that surround and connect galaxies and groups of galaxies. A team led by the University of Bonn has now observed for the first time a gas filament 50 million light-years long. Its structure is strikingly similar to the predictions of computer simulations. Therefore, the observation confirms our ideas about the origin and evolution of our universe. The results are published in the journal Astronomy and astrophysics.

We owe the existence of a small aberration. Almost exactly 13.8 billion years ago, the Big Bang took place. It is the beginning of space and time, but also of all the materials that make up our universe today. Although initially concentrated at some point, it expanded at breakneck speed – a giant cloud of gas in which matter was distributed almost evenly.

Almost, but not completely: in some parts the cloud was a little denser than in others. And only for this reason are there planets, stars and galaxies today. This is due to the fact that the denser areas exerted slightly higher gravitational forces, which attracted the gas from their surroundings to them. Therefore, more and more subjects have been concentrated in these regions over time. However, the space between them became increasingly empty. Over the course of 13 billion years, a kind of sponge structure has developed: large “holes” without any matter, with areas between which thousands of galaxies are gathered in a small space, the so-called groups of galaxies.

If this is indeed the case, galaxies and clusters should still be connected by remnants of this gas, like the thin gossamer threads of a spider’s web. “According to calculations, more than half of all baryonic matter in our universe is contained in these filaments – this is the form of matter that makes up the stars and planets, just like ourselves,” explains Prof. Dr. Thomas Reiprich of Argelander Institute of Astronomy at the University of Bonn. However, so far we have lost sight of it: Due to the enormous expansion of the filaments, the matter in them is extremely diluted: it contains only ten particles per cubic meter, which is much smaller than the best vacuum we can create. on earth.

However, with a new measuring instrument, the eROSITA space telescope, Reiprich and his colleagues have now managed to make the gas fully visible for the first time. “EROSITA has very sensitive detectors for the type of X-ray radiation that emanates from the gas in the filaments,” explains Reiprich. “It also has a large field of view – like a wide-angle lens, it captures a relatively large part of the sky in a single measurement and at a very high resolution.” This allows you to take detailed images of huge objects such as filaments in a relatively short time.

Confirmation of the standard model

In their study, the researchers examined a celestial object called Abell 3391/95. This is a system of three groups of galaxies, which is about 700 million light-years away from us. The eROSITA images show not only the groups and numerous individual galaxies, but also the gas filaments that connect these structures. The entire filament is 50 million light-years long. But it can be even more enormous: scientists assume that the images show only one section.

“We compared our observations with the results of a simulation that reconstructs the evolution of the universe,” explains Reiprich. “The eROSITA images are strikingly similar to computer-generated graphics. This suggests that the widely accepted standard model for the evolution of the universe is correct.” Most importantly, the data show that the missing matter is probably hidden in the filaments.

Reiprich is also a member of the Transdisciplinary Research Area (TRA) “Blocks of Matter and Fundamental Interactions” at the University of Bonn. In six different TRAs, scientists from the most diverse faculties and disciplines come together to work collaboratively on research topics relevant to the future of the University of Excellence.

Has the hidden matter of the universe been discovered?

Provided by the University of Bonn