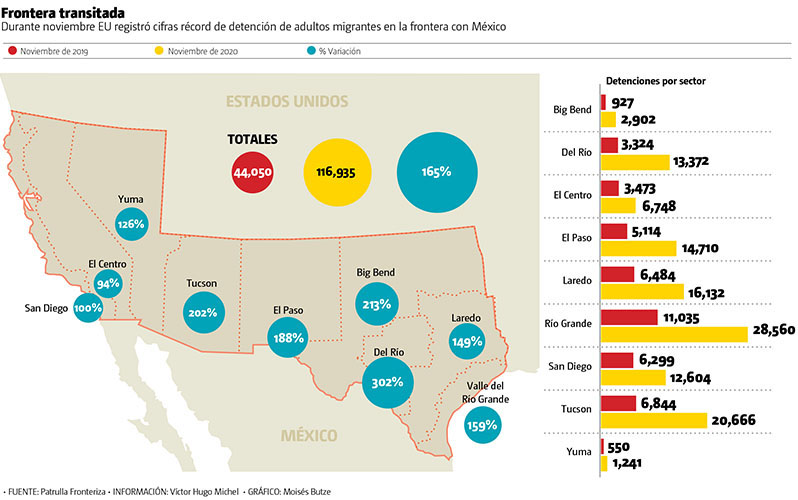 The latest period of the Donald Trump administration has seen a reactivation of migratory flows on the border with Mexico, as only last October and November were more than 140,000 migrants detained in their attempt to enter the United States, a figure it was registered no more than five years.

According to data from the United States Customs and Border Protection (CBP), the crossing of 140,000 591 migrants was thwarted in October and November 2020, a figure 60 percent higher than the 87,000 782 inmates in the same period of 2019, a flow that was unregistered since 2014, according to the CBP report.

For last month alone, the figures are even higher if we compare them to November 2019. At that time, 44 thousand people were arrested trying to enter US soil, while the number increased in November this year. 116,935 migrants in prison, representing a 165 percent increase in the number of unauthorized border crossings.

At this point, the Del Río border sector in Texas stands out, where the number of migrant detainees increased from 3,324 in November 2019 to 13,372 in November 2020, corresponding to an increase of 302 percent.

This border sector is followed by Big Bend (also in Texas), where 927 undocumented migrants were detained in November 2019, a figure that rose by 213 percent in November of this year when 2,902 people attempting to cross the border illegally were arrested. .

NO FEAR OF COVID

CBP information shows that neither the COVID-19 nor the border closures have prevented more than 397,000 migrants from crossing the border between Mexico and the United States since the pandemic began.

Between March and November, the Dutch DPA registered the detention by border guards of 397 thousand 60 migrants. Of these, 345 thousand 237 were single adults, 26 thousand 283 migrants constituting family units and 25 thousand 540 unaccompanied minors.

In total, the figures show that throughout 2020, 32,106 unaccompanied minors, 41,669 persons in family units (i.e. a person under the age of 18 with a parent or legal guardian) were detained at the various border entrances of the United States. detainees, or with another family member), and 396 thousand 557 unaccompanied adults, representing a total of 470 thousand 332 detained migrants.

Due to the pandemic, the United States government enacted a partial closure of its borders from March 21 to prevent the entry of people who may pose a risk to the health of citizens, a measure that has been extended until March 21. next December, which only citizens or those with permanent residency are allowed entry and entry into the country from border and tourist visas is prohibited.

Given the increase in migrants who have attempted to reach the neighboring country in recent months, Interior Ministry Undersecretary for Human Rights, Population and Migration, Alejandro Encinas, stated at the Attention to Refugees in the context of the pandemic meeting that Mexico is willing to receive a large number of migrants who will become refugees, and even Mexican citizens.