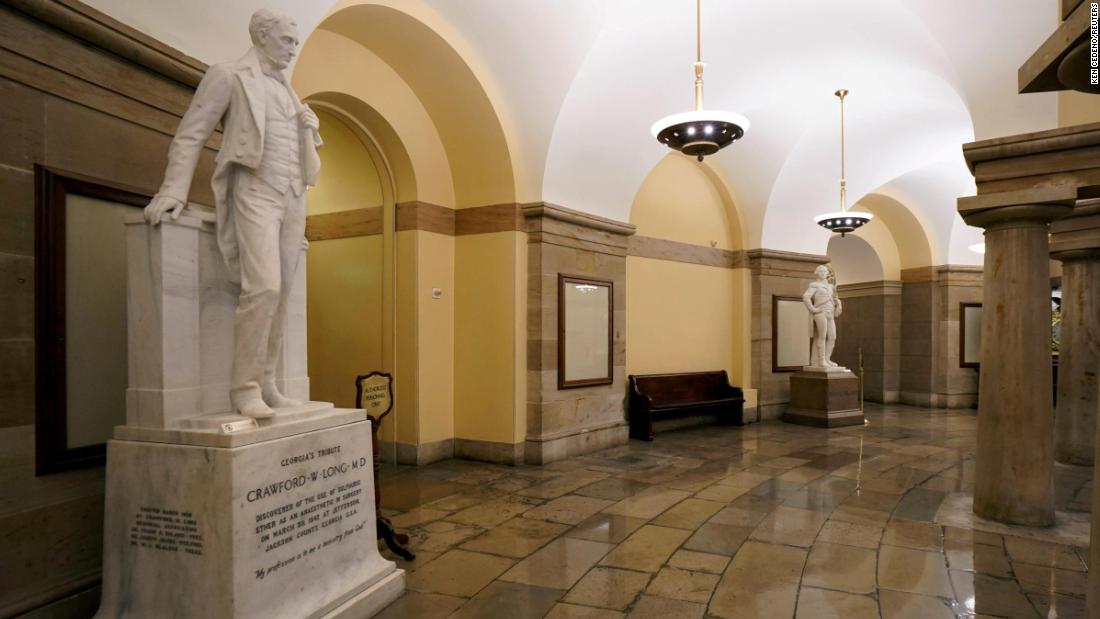 By law, all states are allowed to donate two statues to the Capitol to display around the building as part of the National Statuary Hall Collection, and they can replace existing statues through a process involving the legislature and the state governor.
The removal of Lee’s statue – one of the many statues around the Capitol depicting Confederate soldiers and officials – is part of a larger trend to downgrade symbols of the Confederacy, due to their racist nature.

In a statement, Virginia Gov. Ralph Northam’s removal of Lee’s statue as a “major step forward” for the state.

“I look forward to seeing a pioneering young woman of color represent Virginia at the US Capitol, where visitors will learn about Barbara Johns’ contributions to America and enable them to make positive changes in their communities, just like them, ”he said.

It’s not clear when the statue of Johns will be erected for display – but Northam’s office announced that Lee’s statue was being removed from the Capitol at night on Sunday.

In 1951, at the time of the strike, Johns attended the all-black Robert Russa Moton High School in Farmville, Virginia.

The school, now a National Historic Landmark and Museum, is described as “the birthplace of America’s student-led civil rights revolution,” according to the Moton Museum website.
When Johns was a student, according to the Encyclopedia Virginia, the school’s facilities lacked science labs, a gym, and a cafeteria. There was no plumbing. School supplies were old and shabby, especially when compared to the equipment of the nearby all-white Farmville High School. The buildings were heated by wood stoves.
The school was also overcrowded – although it was built to house 180 students, it was used for more than 400 at the time, according to Encyclopedia Virginia. The county had built several freestanding plywood and tar paper buildings in an attempt to hold the overcrowded students.
When Johns complained to a teacher about the conditions in the school, the Moton Museum said, she got the following answer: “Why don’t you do something about it?”

On April 23, 1951, Johns led her classmates on a two-week strike in which students refused to attend classes.

Their actions caught the attention of the Virginia chapter of the NAACP, which agreed to take their case to challenge the constitutionality of segregation, Moton Museum said.
Three years later, in 1954, their case – Davis v. County School Board of Prince Edward County – was one of five bundled with the 1954 Brown v. Board of Education case of the Supreme Court, which made the segregation of schools unconstitutional. was stated.

In 1953, Johns and her peers were able to move to a new school with facilities just as good as the nearby all-white school, Encyclopedia Virginia reported.

Still, Prince Edward County, the county where Farmville is located, continued to fight against desegregation for years after the protests of Johns and Brown v. Board.

According to the Brown v. Board of Education NHS Visitor Center website, white Virginians launched a campaign of mass resistance.

“The Prince Edward County Board of Supervisors declined to release money for the County School Board for the period 1959-1964,” the website says, “effectively closing the public schools rather than integrating them.” The provincial schools were closed for five years.

However, Johns moved to Alabama to complete her education and eventually graduated from Drexel University in Philadelphia, according to the Moton Museum. After her studies she became a librarian.

Her statue of the US Capitol will be the last public recognition of her contribution to the civil rights movement.

In 2017, the building that housed the Virginia Office of the Attorney General was named in her honor.
April 23 – the first day of the historic strike – is celebrated in Virginia as Barbara Johns Day.
And in Farmville, a community library bears her name.

CNN’s Jennifer Henderson and Devan Cole contributed to this report.