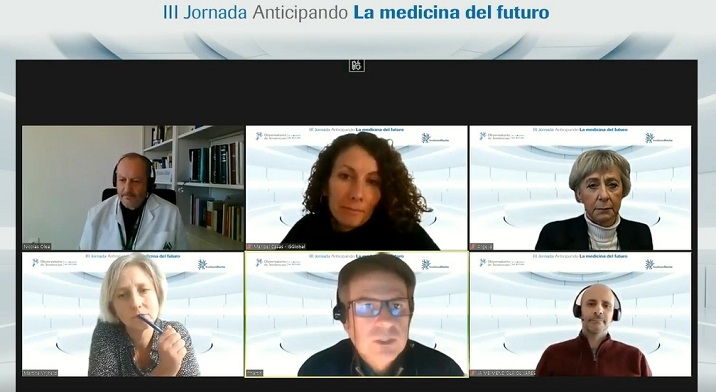 Its high cost funding conditions the implementation of advances in techniques and technology, although ethical and training issues remain to be addressed.

medicine of the future, which not many years ago was a little less than science fiction, is already a reality today in areas such as cell and gene therapy or in the implementation of programs that allow the control of millions of data. But despite the enormous power of these tools, not even the most sophisticated of technologies “will ever replace the professional. We do not face the near future of robe computers. “

This graphic statement was made by José Manuel Jerez, professor of languages ​​and computer systems at the University of Malaga, who was one of the speakers at the third conference “Anticipation in the medicine of the future”, organized by the Roche Institute Foundation for to analyze a tomorrow that is already present. However, some of the spectacular advances that are a reality today still have important challenges to face, especially that of financing its high cost, to which must be added the pending ethical debates and the need for continuous training of professionals to promote clinical application.

The starting point of the day was the three new “Anticipatory” reports promoted by the Observatory of Trends in Future Medicine, dedicated advanced therapies (cellular and genetic), at exposure already ethical and legal challenges of artificial intelligence (IA) in health. At this last table, José Manuel Jerez intervened that, although he does not see that it is around the corner that a robot in a dress will replace the doctor, he influenced the fact that the most spectacular results in terms of AI take place in the processing images, to the point where an algorithm can already detect certain types of tumors with greater accuracy than a team of professionals. The medicine of the future, in his opinion, “will be an engineering problem, as well as a medical one”.

Coinciding with the above, Encarnación Guillén, president of the Spanish Association of Human Genetics (AEGH), said that “the professional will always be the key”. Of course, he emphasized two key issues for things to continue like this: an improvement in training is “very important” and it is “critical” that new professional profiles be incorporated, “we need to understand the processes”.

The coordinator of the report on the ethical and legal challenges posed by artificial intelligence was Carlos Romeo, coordinator of the Chair of the Research Group for Human Rights and Genome at the University of the Basque Country, for whom one of the main health risks is . To this he added his concern about the doctor’s autonomy in the face of proposals made by an AI and the risk of depersonalizing the relationship between professional and patient.

At the same table, the need to build confidence in these new tools on the reality of transparency and proper control was added, to which was added the demand to ensure as much data as possible and to improve its integration, and this is There is still a long way to go to achieve a complete interconnection at the level of the national health system. Moreover, AI is already used for countless applications, such as looking for new options for already used drugs, although, based on the fact that it will never replace human contact, its main contribution may be that professionals gain time.

Another table of the day was “Advanced Therapies: Cell Therapy and Gene Therapy”, techniques to which speakers dedicated adjectives such as “spectacular”, “incredible”, “extraordinary”, “amazing” or “impressive”. The context was set by the moderator, Ángel Carracedo, director of the Galician Public Foundation for Genomic Medicine, who stressed that in 2027 there will be more than 1,000 treatments to address rare diseases or that, in the same year, 10% of drug spending will be related to these pathologies.

Participants agreed with the spectacular nature of therapies that represent a paradigm shift, to the point where they allow the curative treatment of highly advanced neoplasms. This involves a risk, explained Felipe Prósper, director of the cell therapy area of ​​the University of Navarra Clinic, and is managing expectations, as these techniques “will not cure all diseases of patients who are toxic and will continue to relapse.”

“This is revolutionary, but we have to convey a certain calm, we have to be very honest, because the expectations are brutal,” he added. Associated with this, in his opinion, one of the big problems is that we are talking about “a cost for the system that we are probably not prepared to face”, which can lead to payment mechanisms that endanger the fundamental pillar of equity. “Our system must be correct, otherwise we will have a problem.”

It was also celebrated at the table that the ethical issues in this field were resolved by introducing induced pluripotent cells, which solved much of the moral dilemma initially raised by some professionals. Once this situation has been overcome, another of the pending challenges is the transfer of knowledge from researchers to clinical practice, to which has been added the claim of a subject of genomics or genetics in medical studies.

The last table focused on exposure, the set of external and environmental factors to which a person is exposed before birth to death. In general, there was a coincidence with what was previously pointed out, such as it needs to improve funding and training, in addition to the importance of introducing new professional profiles. Added to this are two challenges, that of incorporating all these advances into primary care and that of being able to conduct studies that include data from a large number of subjects.