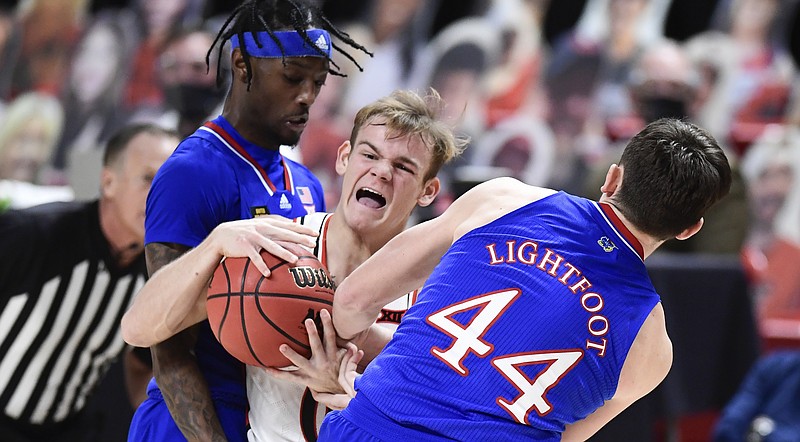 Kansas striker Mitch Lightfoot (44) removes the ball from Mac McClung (0) of Texas Tech in the first half of an NCAA basketball game in Lubbock, Texas, on Thursday, December 17, 2020. (Photo AP / Justin Rex)

If the opening of the Big 12 on Thursday night was a clue, race this year to make the league titles as interesting as ever.

The Big 12 opening between the No. 5 in Kansas and the No. 14 in Texas Tech reached the final possession, Jalen Wilson, the Kansas redhead freshman, came with a game block on a jumper from Terrence Shannon Jr.

It was enough for the Jayhawks to cling to a 58-57 victory over the Red Raiders at the United Supermarket Arena on Thursday.

Kansas junior Ochai Agbaji managed to have the match with 13 seconds left to a beautiful discovery by Marcus Garrett. The sequence came in an out-of-timeout set by KU head coach Bill Self after Texas Tech took a 1-point lead with 34 seconds left in the game.

Agbaji led KU with 23 points on 8-of-11 shots from the ground, including a 4-for-7 long-range effort. Garrett added 10 points to join him in double figures. Wilson, who struggled and finished with just 7 points, made the game in the end.

Kansas has won 30-year conference openers dating back to the 1991-92 season and 18 of those victories have come their way.