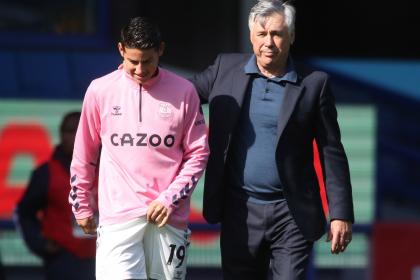 Carlo Ancelotti, DT from Everton, confirmed on Friday that he will not have James Rodríguez on Saturday, against Arsenal (12:30 Colombian time), for the Premier League.

It will be the third game in the line that the Colombian misses, after the absences against Chelsea and Leicester, rivals in front of which Everton obtained important victories that today have him on the fifth place in the ranking, at 5 units behind the leader, Liverpool.

After explaining that the southpaw is not ready yet, that it is working again, but that they will not risk it and hope “that it will be ready for the match against United for the Carabao Cup”, the questions were very specific about the state physical and defensive commitment of who was one of the revelations at the beginning of the season.

Ancelotti clearly answered whether the team would improve without number 19: “I don’t think so,” he said with a laugh. “It’s true that in the last two games we had a clean sheet, but the most difficult thing was to do it on the first day of the season (against Tottenham) and it was with James. We had a period in which we didn’t defend ourselves. good as a team “.

When asked if he was worried that he didn’t have one of his stars in three games in a row, he simply said, “He didn’t play those games because we have games every three days, that’s the situation, the problem is in his ankle, but it’s nothing. special, “he explained.

In this way, Ancelotti ratifies his total confidence in the Colombian, he seems to rule out that on his return he will have to compete with someone for the position or that his commitment is in question, beyond what it costs him to fulfill in defensive tasks. With James on the field, Everton will play differently and nothing else, it is not that he plays worse, at least in the consideration of DT. This makes recovery easier. Thus, with DT on his side, his best version is expected.