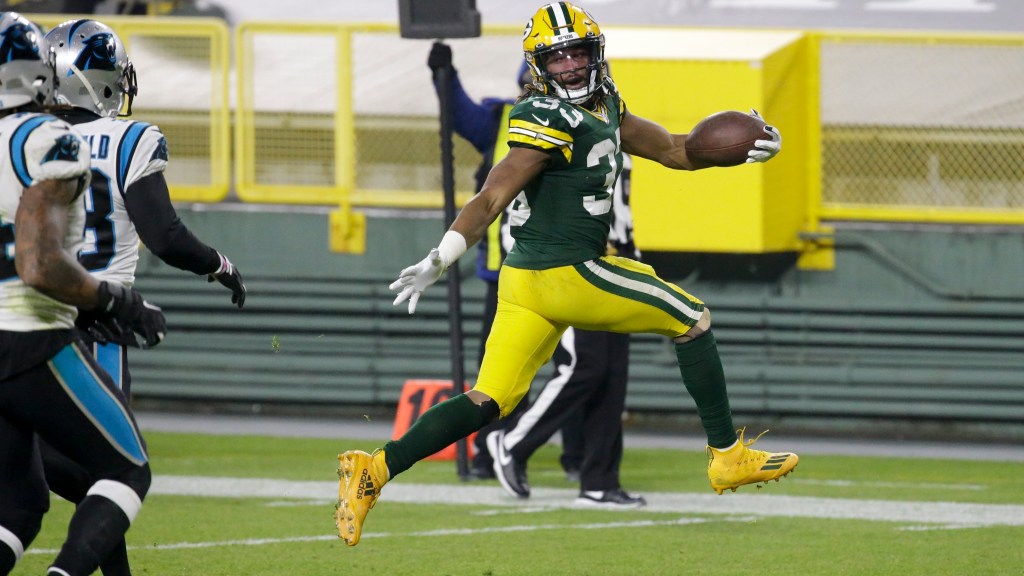 The Green Bay Packers did not throw the Carolina Panthers out of the water with an elite performance in attack, but 21 quick points and a few important stops in defense were enough for Matt LaFleur’s team to win an 11th game in 2020 on Saturday night at Lambeau Camp.

Here are the pins and shortcomings of the Packers’ 24-16 victory:

S Adrian Amos: He’s been all over the field since the second scrimmage play. The Panthers tried to catch him by sleeping in the wrong direction, but the safety of the veterans quickly diagnosed him and stuffed DJ Moore in the apartment after a short win. In a series before the half, he separated passes over the middle destined for the tight end Ian Thomas and the receiver Curtis Samuel in the first descent and, respectively, in the third descent. Both required diving diversions. He later put an end to Teddy Bridgewater’s disastrous attempt along the sideline, approaching the Panthers defender down for a sack and a short loss. He also saved seven points with an impressive split of the pass against Robby Anderson, who was currently open in the final zone. He paused late and interrupted the capture point.

RB Aaron Jones: Of its 20 ports, 13 gained five or more yards, including three over 10 yards. Six won the first descents. The front lock was solid, allowing Jones to jump through the holes and make a living for the second-tier defenders. Do not hesitate even for a moment when there is an opening. On the first road, it took a supreme effort on the part of Jeremy Chinn to prevent a touchdown during his 46 yards. Packers do not like to overload it, but it deserved more touches and more opportunities. The Panthers played easily, the Packers won along the line of scrimmage, and Jones was active. All the unproductive RPOs and running alerts kidnapped him from what could have been an even more impressive night.

LB Krys Barnes: The Packers gave the rookie a headset and promoted him to defender Mike, and he prospered. The great play was the forced groping on the goal line, which Barnes created with a clever movement when Bridgewater tried to extend the ball over the pile. Rookie eliminated her and changed the game. Later, he perfectly diagnosed a passage of the screen and blew it up for a loss of 6 meters. His defense was just as encouraging. Three different times, he attacked Mike Davis after only a 3-meter gain. An eye injury forced him to leave after 31 shots.

RG Billy Turner: His blocks at the point of attack helped create two of Jones’ best runs, including the 46-yarder in the first quarter. His athleticism can be useful on guard, especially in shooting games where he can use his speed to get into position and surprise the bottom defenders. He stretched an unsuspecting defender as he pulled to the left, wiping a hole. Pro Football Focus accredited him with a single pressure allowed over 38 catches blocking the passage.

DL Kenny Clark: Often, Clark’s impact on a game is not evident in the boxing score and cannot be fully realized until the second or third revision. That was the case. Clark was disturbing, especially as a flier. He had half a dozen pressures, mostly the result of winning an individual opportunity and getting Bridgewater out of his pocket or into more trouble. He’s been great for the last month or so, a clear sign that he’s healthy after some injury issues in the middle of the season. His dominance inside can change the equation for the Packers defense as the playoffs approach.

K Mason Crosby: Another perfect day. He converted all three extra points and hit a 51-yard field goal in the fourth quarter. The final shot was particularly impressive, given the situation of the game and the difficulty of hitting long shots at Lambeau Field in December. His attempt was good at 51 and would probably have been good at 55 or more.

CB Kevin King: He forced a fight with a hit that was eventually penalized, and his recovery was a quick and coordinated move at an important moment in the game, but almost everything else went wrong for King, who gave up six catches for 127 yards, including 97 to DJ Moore. He missed two approaches, ended up with two penalties, including a crucial third call in the red zone and allowed five catches on the first descent. Moore beat him deep for a great piece and then broke a few approaches to create another later. Robby Anderson left him in the dust for a 15-meter catch on the third down of the slot. The defenders are not targeting Jaire Alexander, which means that more and more action is coming in King’s way. It has to be better.

LG Lucas Patrick: Both of Derrick Brown’s sacks came against the Packers’ left guard. On the first, Brown took a quick step and a hand-to-hand fight to spin Patrick and swarm Aaron Rodgers in his pocket, stopping the final unit before the half. A trip later, on the other side of the half, Brown threw himself over Patrick with power in the third row, although the Packers (rightly) wanted illegal hands in front of them. In his defense, Patrick was largely good in the race.

WR In front of Adams: A rare game at number 17. He was in the double team for most of the game, but he didn’t always convert when he was offered a few opportunities on the field. On the first, he threw a ball that goes to the side in a launching action. It would have been a difficult catch, but it is also one he expects to finish. Later, he had a loose ball in the middle of the field, at a great shot by a defender. The packers tried to feed him the ball with short, quick throws, but the Panthers did a great job approaching him in the open. In the second half, he caught two passes on four targets for four meters. Officials also penalized him with 15 meters for a personal foul after a capture.