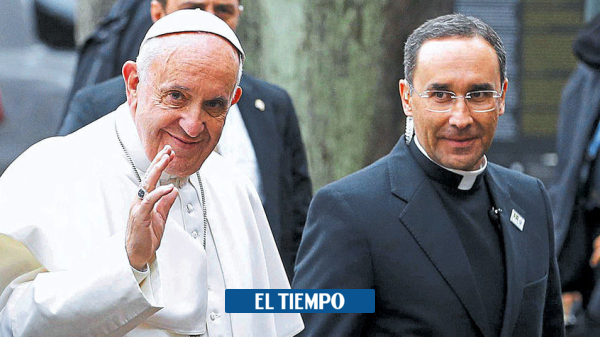 The Monsignor and Colombian diplomat Mauricio Rueda Beltz was recently appointed by Pope Francis to a high position within the Vatican, where he will fulfill diplomatic functions.

Specifically, Rueda Beltz was appointed undersecretary of the Vatican Secretariat of State. The Colombian Monsignor will henceforth be in charge of the ‘Staff Section of the Holy See’s Diplomatic Service’.

This department is solely responsible for matters pertaining to persons working in the diplomatic service of the Holy See or who are preparing to enter it, and it is made to show the attention and closeness of the Pope and the Secretary of State’s superiors to personnel who play a diplomatic role.

(Also read: A tree of light for Christmas in Colombia)

The 50-year-old priest served as director of papal journeys for four years. However, Due to the pandemic and the cancellation of all visits by the Pope, he was removed from office and later appointed as a counselor to the Apostolic Nunciature in Portugal, a position he held in recent months to replace Colombian Monsignor Amaury Medina Blanco.

In addition, Rueda Beltz has served in diplomatic positions at the Vatican for over 15 years. In 2004 he was part of the diplomatic service of the Holy See and worked in countries in different parts of the world as Equatorial Guinea, Jordan, Chile and the United States.

Born 50 years ago in Bogotá and ordained in 1996, the priest specializes in canon law and with this appointment he will be the Colombian of the highest rank within the Vatican.

During the ceremony, Pope Francis also took the opportunity to appoint Archbishop Jan Romeo Pawlowski as Secretary for Papal Representations.

THE LIFE OF WRITING TODAY

– Pope Francis sent a message to those affected in Providence