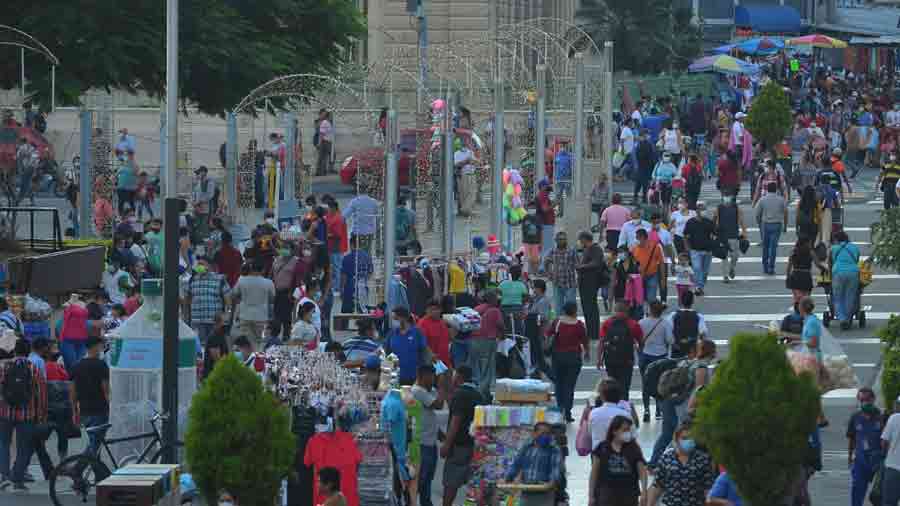 Minister Alabí assured that the vaccine that will come to El Salvador in 2021 will be effective against the new strain.

The extended health cabinet held a press conference on Monday, reiterating its call on the Salvadoran population not to relax biosecurity measures in the face of the spread of COVID-19.

The Minister of Health, Francisco Alabí, assured that the increase of daily infections is due to the agglutinations that take place in different municipalities for holidays, Christmas shopping and the end of the year.

El Salvador registered another 295 coronavirus infections on Sunday, bringing the number of confirmed positive cases to 43,772, and deaths a total of 1,257, according to official figures updated Monday.

The official reported that so far there are no restrictions other than a ban on flights from the UK and South Africa, which was announced following the emergence of a new strain of virus.

You might read: Preventing Salvadorans from entering is unconstitutional, lawyers say

With the new strain of the virus, each infected person could transmit the virus to another 10, the minister added. One of the characteristics of this new mutation is that it is more contagious, although not more deadly.

Alabí explained that the vaccine that will come to El Salvador will be effective against the new strain and would generate increased immunity from the beginning, as the mutation changes the way it adheres or the way the virus enters human cells, but the effects and symptoms I’m the same. He assured that changing the S protein facilitates adhesion because the protein is lighter.

“Increasing the transmission by almost 70% (…) it could affect ten Salvadorans for each of the Salvadorans affected, in this regard we must be very careful,” he said.

The official explained that this mutation only affects the S protein, but does not alter mortality and does not affect the vaccine principle “which is to generate immunity by generating sensitivity to the host.”

“In this regard we can remain calm, because the vaccine continues to generate that effect and mutations will continue to occur because there are changes that are generated in the adaptation of the population group, the virus guarantees its survival,” he said.

Hundreds of people pass through the Historic Center of San Salvador for shopping, boarding and transportation. Many of them forgot the correct use of the mask. Photo EDH / Jonatan Funes

Increasing the number of cases

According to the official website of the Ministry of Health (Minsal), Sunday’s figure is the highest reported so far in December and further confirms the upward trend that has been recorded in the country since 9 of that month. .

Recommendation: Are COVID-19 vaccines effective against the new strain detected in the UK? That’s what experts say

In addition, Minsal reported that seven more people died due to COVID-19. Six of the victims were men between the ages of 50 and 80, and the seventh was a woman over the age of 80.

Alabí alerted Salvadorans to an increase in daily cases, which could exceed the hospital’s capacity to care for them.

He also warned that the country was on the verge of repeating the “most critical” moments of the coronavirus pandemic, which could cause a “second wave” of infections in early 2021.

“We are on the verge of what happened in the most critical moments of the pandemic in our country,” said the official, referring to last July and August, when the largest records of daily infections took place.

In this context, President Nayib Bukele announced on Sunday on his social networks that he has banned people from entering South Africa and the United Kingdom due to the new coronavirus mutation detected in the latter country and which makes it more contagious.

Bukele advised Salvadorans in Europe to “speed up their travel itineraries as much as possible before the new restrictions are imposed by the new coronavirus strain.”

Also: This is what you should know about the “N5017” mutation, the new strain of coronavirus

The emergence of a new variant of the virus has forced the British authorities to impose harsh restrictive measures in part of the country due to the alarming increase in infections.

Faced with scientific evidence that the new strain is accelerating transmission by up to 70%, British Prime Minister Boris Johnson has been forced to change population plans for this Christmas.