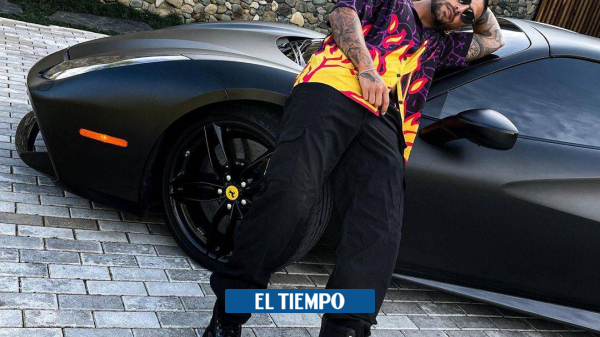 Maluma, one of the most important urban music singers of the moment, showed his new acquisition in a post on his Instagram account: an exclusive black Ferrari worth a million dollars.

The model of the vehicle that appeared in the publication, which already has over a million “appreciations”, is a Ferrari 488 GTB, in its black version. It has a 3.9 V8 biturbo engine, which uses naphtha (obtained from the distillation of gasoline) as fuel.

(You can also read: Jennifer López and Maluma postpone their movie “Marry Me”).

The Ferrari 3.9 V8 biturbo engine was listed as one of the best on the market.

The Ferrari 3.9 V8 biturbo engine won the award for best engine of the year at the 2019 International Engine of the Year Awards, held in Stuttgart, Germany.

It is also used in Ferrari references, such as the 488 Spider, Track and Spider Track, has 670 horsepower (power) and 718 Newtons per meter of torque (the ability of a car to move something hard).

The car accelerates to 100 kilometers per hour in just three seconds, reaching speeds of up to 335 km / h.

(Read also: Maluma records a remix for “Hawaii”, with The Weeknd singing in Spanish).

(Can you visit us from the app? You can see the image here).

(You may also be interested in: This was the emotional reunion of Maluma and his mother after quarantine).

The Colombian singer had already shown other luxury cars, such as a red Ferrari vehicle and a private plane that he bought in 2019.

(Can you visit us from the app? You can see the image here).

(You can read: Who is the architect who would be Maluma’s new girlfriend?).

In any case, this vehicle was reminiscent of the black Ferrari Testarossa of the Argentine ‘D10S’, Diego Armando Maradona, who died on November 25.

The Argentine star asked for this “toy” in the late 80’s, after the 1986 World Cup in Mexico, from his friend and manager at the time, Guillermo Coppola.

According to the Argentine newspaper ‘La Nación’, Coppola recalled this request of the former footballer as an anecdote: “When they brought him in, Diego started looking everywhere for the radio. I explained to him that it was a race car and that’s why it didn’t have a radio, air conditioning or anything ”.

(Also: the controversial kisses of Cannigia and Diego Maradona).

Prior to the publication of the Ferrari photo, Maluma expressed dissatisfaction with the current situation in the music industry due to the new coronavirus, which limited the artists’ presentations to a minimal audience or virtuality.

“How I miss singing you live! All my music from 2020 was, without a doubt, the best of my career, but at the end of the day I just want to be happy with you, my fans “, the singer paisa wrote in a post on his Instagram account.

Very soon we will see each other and hug, I promise

(Can you visit us from the app? You can watch the video here).

(You may also be interested in: The extravagant plans of footballers and singers).