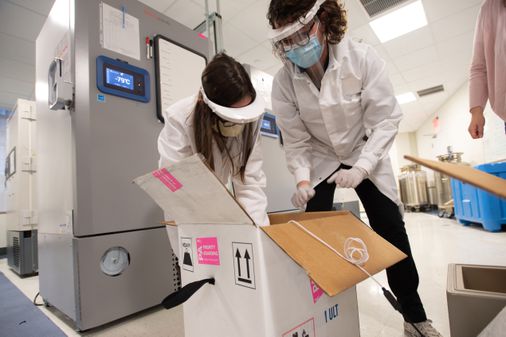 The leaders of the state’s largest hospital system have apologized to the 80,000 employees for the rocky launch of their COVID-19 vaccination program, including the collapse last week of an online system created to schedule vaccine schedules.

But the initial snafus will not delay General Brigham’s plans to vaccinate all of his top-priority workers by Jan. 8, according to an emergency training doctor.

These include front-line care and other care workers in emergency departments, intensive care units, emergency care and respiratory disease centers at Massachusetts General Hospital, Brigham Hospital and the Women’s and Smaller Community Hospitals in the state.

“We are sorry that they were frustrated,” said Dr. Paul Biddinger, medical director of emergency training at Brigham General, about employees who were initially unable to use a software application to schedule vaccinations. “And, given everything our employees have contributed and everything they’ve gone through, we want them to know they’re appreciated.”

The outage, which began late on Dec. 16 and continued until the next morning, resulted in an overload of the online enrollment system, the hospital said, “led by a large volume of employees trying to schedule an appointment on their own. meeting for a COVID-19. vaccine.”

The outage has brought back painful memories for a number of health workers, for whom the severe lack of personal protective equipment earlier in the pandemic is still cruel.

Biddinger, noting that hospital leaders have communicated with their employees about the launch challenges, said General Brigham’s mass technicians are working on reviewing the application so that employees can register sequentially to schedule vaccination schedules and the software will recognize what wave falls. He said the hospital system hopes to vaccinate more than half of its employees – all those facing patients – by the end of February.

The noise of the new vaccines developed by Pfizer and Moderna is also a concern in other Massachusetts hospitals, said Biddinger, who heads the Baker Administration’s advisory committee, which has created a framework for vaccinating high-risk workers and residents as more supplies for the new vaccines. wine available.

While other hospitals schedule vaccinations manually or empower supervisors to set schedules, “I have not yet spoken to a hospital where staff have not had questions about priorities,” Biddinger said. “That is to be expected.”

Biddinger said General Brigham received just under 9,000 doses of Pfizer vaccine last week and expects to receive more than 30,000 doses of vaccine from Cambridge-based Moderna as of this week. The Moderna vaccine was approved by the Food and Drug Administration for emergency use last Friday, a week after the FDA granted emergency use of the Pfizer vaccine.

A positive note in the early launch, Biddinger said, was that General Brigham’s medical staff managed to squeeze six or seven doses out of five-dose vials that were intentionally overloaded by Pfizer, an FDA-approved practice.

“This gave us a 20 percent bonus in vaccine supply,” he said.

Biddinger said many of the challenges facing hospitals in the early stages of launch will improve as supply expands in the coming weeks.

“In general, our medical system is not used to deficits on this scale,” he said, “certainly not in this context of tension and emotional fatigue that this workforce faces. You can’t exaggerate the stress on the health workforce right now. And you also can’t exaggerate their commitment to patients. “