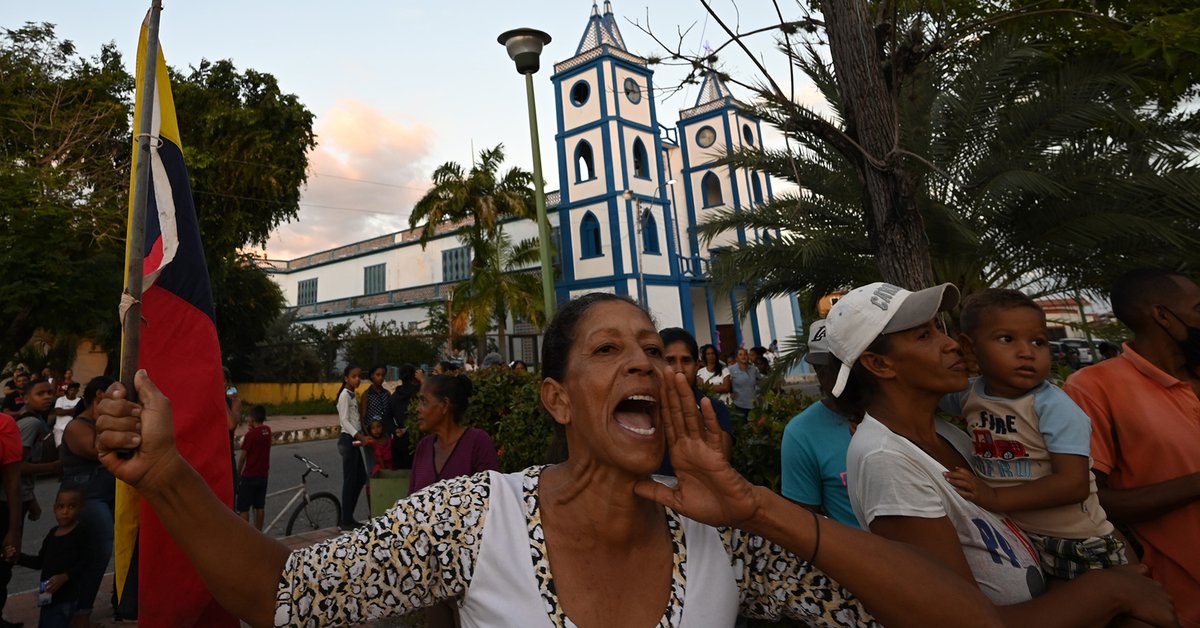 For the second night in a row, Residents of the Venezuelan city of Güiria have taken to the streets to demand justice for at least 28 people who died in a shipwreck that took place last week on the road between that city and Trinidad and Tobago.

Hundreds of people protested in the coastal town square on Thursday, about 100 km from the Port of Spain, which has become a popular way out for those fleeing the crisis who want to emigrate to Trinidad.

According to local media reports, residents of Güiria protested to the GNB, Coast Guard and CICPC commands demanding justice, and then they went to Pier 7, from where the victims were sailing.

The number of Venezuelans killed as a result of the sinking of a precarious boat has grown in recent days as more bodies are found. The figure reached 28 on Wednesday, as confirmed at a press conference on Thursday by the regime’s attorney general Nicolás Maduro, Tarek William Saab.

The boat allegedly sailed on December 6 with about 30 people “to reunite with their families” for Christmas, according to information from Chavismo. However, shipwrecked between Güiria (Sucre, northeastern Venezuela) and the island of Trinidad.

The episode came to light one of the most unknown and difficult migration routes, while complaints against the two countries are multiplying. In addition, the journey is very dangerous and hundreds of people have disappeared.

All the people on board the boat that left on December 6 and were shipwrecked were from this city., which goes between sadness at every funeral and outrage at what they say was a weak response in rescuing and controlling human trafficking operations.

– Justice, justice! about 800 protesters shouted and marched from the town square, where the church is located, on streets with Venezuelan flags, whistles and flags.

The Venezuelan authorities, who opened an investigation, had a two days ago helicopter to support the search for the victims of this shipwreck, whose conditions are not very clear.

All that is known is that the first bodies appeared 13 km off the Venezuelan coast last Friday and were found by a Coast Guard officer.

However, Tadira Mata, a physical education teacher, said that the official answer came too late.

“From the moment it happened here there was no one to help, those who went out to look for them were the fishermen with their little petrol“He told the agency AFP this woman who claims to have lost 10 former students in the shipwreck. Fishing crews continue to go out every morning to search. Sometimes I spend all day and night.

The march was commanded by the National Guard, which is responsible for the transit of ships. “Corruption is terrible in the National GuardThey are only interested in the money they earn from entering and leaving the boats “, criticized Carla, aged 40, resident in the city and present at the protest.

“He doesn’t care about the responsibility or the departure of a canvas, nor is there anything legal that has evidence about who is leaving, who is coming, how many people are leaving because we understand that people want to leave, but we offer them the opportunity to legalize yourself “he added.

Protests in Güira, Venezuela, call for justice for shipwreck that leaves at least 28 dead

The Public Ministry announced on the same Thursday that he demanded the capture of seven National Guard soldiers for extortion as a result of an investigation into what happened.

Authorities have already arrested two people in this case: the owner of the boat and the owner of the farm he left. They will be charged, Tarek William Saab explained, for “Illegal trafficking in human beings and criminal association”.

According to Saab, each of the migrants on board the ship paid $ 150 for what he defined as a human trafficking “mafia.”, through which his office issued four new arrest warrants.

“This situation affects us all equally in the village because we all have a family connection, we all know each other, we are like a tree“Said César Noriega, who together with two other volunteers provided his truck and electric generator for transporting corpses and lighting night funerals.

“I have a cousin we are waiting for, his name is José Carlos San Vicente, We ask God to appear every day. “he added.

The UN estimates that More than five million Venezuelans have left their country forced by the crisis since 2015 and about 25,000 have chosen Trinidad and Tobago as their destination. The island, with 1.3 million inhabitants, says it has facilitated the registration of 16,000 Venezuelans.

With information from AFP