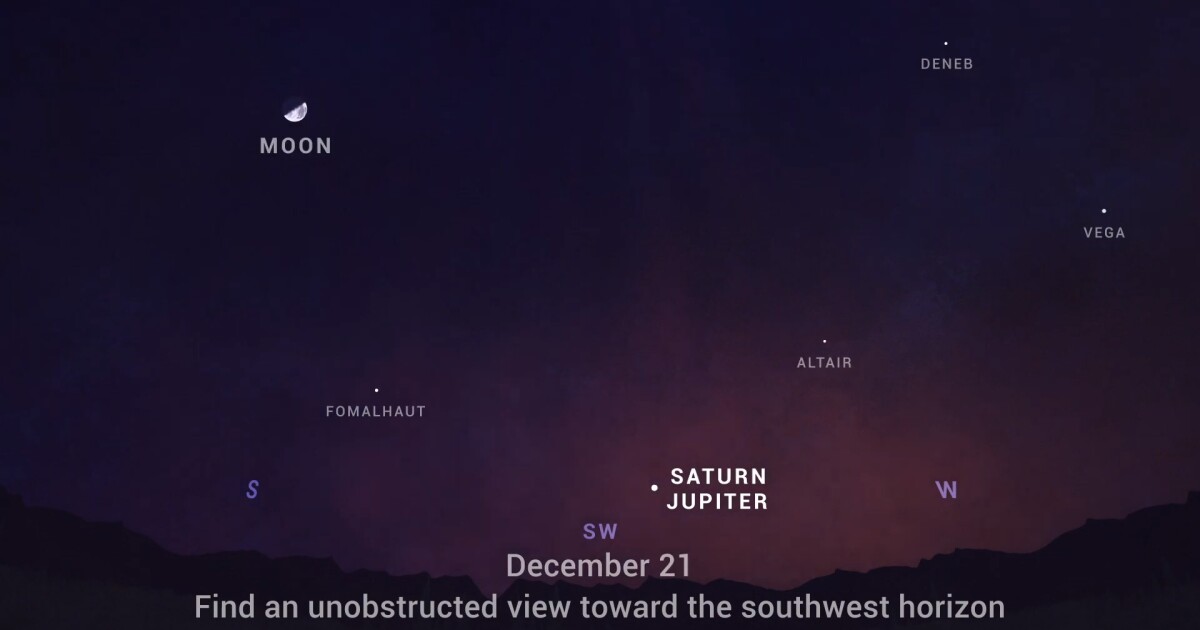 Jupiter and Saturn, the two largest planets in the solar system, will be stationed in almost the same place in the night sky on Monday, creating a luminous spectacle.

The positions of the two planets line up every 20 years, according to NASA. While conjunctions occur several times during a typical life, a conjunction of this magnitude is quite rare. The last time the two planets were so close together in the night sky was 400 years ago, but no one could see it as that conjunction occurred during the day.

The last time a conjunction of its size happened at night was 800 years ago.

The best time to view the conjunction will be about an hour after sunset in the southwestern sky. Jupiter will appear to be brighter than Saturn because it is closer and larger.

So what causes the conjunction?

“You can imagine that the solar system is a racetrack, with each of the planets as a runner on its own lane and the Earth toward the center of the stadium,” said Henry Throop, an astronomer in the Division of Planetary Sciences at NASA’s Washington headquarters. “From our point of view, we will be able to see Jupiter in the inner band, approaching Saturn all month and finally surpassing it on December 21.”

The moment of conjunction adds to the show. Monday also marks the winter solstice.

Being four days before Christmas, some call the event the “Christmas Star”, although the conjunction is of planets and not stars. Scientists have long speculated whether the Star of Bethlehem was the conjunction of 7 BC. of the two planets.

“Such conjunctions could happen on any day of the year, depending on where the planets are in their orbit,” Throop said. “The date of the conjunction is determined by the positions of Jupiter, Saturn and Earth in their paths around the Sun, while the date of the solstice is determined by the inclination of the Earth’s axis. The solstice is the longest night of the year, so this rare coincidence will give people a great chance to go outside and see the solar system. “

While the two planets will appear to be very close to each other, in reality, they will be hundreds of millions of miles apart.