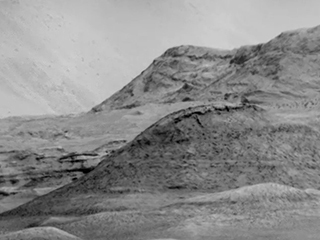 A quick introduction, as I am not a regular author of the Curiosity blog: since landing the rover, I have been involved in ChemCam image processing at the University of Nantes in France. I’m always looking forward to new data, and the images I’ve collected here as a video are a real pleasure.

The team’s recent two-month Housedon Hill imaging campaign while at the “Mary Anning” drilling site broke a record, being the largest mosaic to date with Remote Micro-Imager (RMI). ) from ChemCam. RMI was originally designed to document the tiny areas analyzed by ChemCam’s laser-induced damage spectroscopy (LIBS) technique on rocks just a few meters from the rover. During the first year of Curiosity on Mars, it was recognized that, thanks to its powerful optics, RMI could move from a microscope to a telescope and can play a significant role as a remote recognition tool. Provides a typical “black and white” circular image of a small black and white region. So, RMI complements other cameras quite nicely, due to the very large focal length. When sewn together, RMI mosaics reveal landscape details a few kilometers from the rover and provide images that are highly complementary to orbital observations, providing a more humane, ground-based perspective.

From July to October 2020, Curiosity remained parked in the same place to perform various rock sampling analyzes. This rare opportunity to stay in the same location for a long time was used by the team to target very remote areas of interest, building a growing RMI mosaic between September 9 and October 23 (messages 2878 and 2921) which eventually became 216 superimposed images. When sewn in a 46947×7260 pixel panorama, it covers over 50 degrees of azimuth along the horizon, from the lower layers of the “Mount Sharp” on the right to the edge of the “Vera Rubin Ridge” on the left. The inserts show how the high resolution obtained by RMI reveals various forms of geological relief, such as a field of sand undulations near the Vera Rubin ridge and an impressive variety of stratified units. All these features highlight the complex geological history of Gale crater. Mount Sharp has a prominent “marker bed”, a single distinct layer that can be traced almost along its base, which stretches for tens of kilometers. It appears in this mosaic as a dark layer that marks a key change in the formation of the mountain. slopes.

By stretching the contrast of the image in the middle of the panorama above the foreground, one can even recognize features corresponding to the blocked rocks that rolled partially down from the wall of Gale’s crater, in the distance. When measured using Mars Reconnaissance Orbiter’s Orbiter’s context camera (CTX) images, these blocks are 59 kilometers from the rover – a record distance for a ChemCam / RMI observation. This is the equivalent of seeing downtown Baltimore buildings in downtown Washington DC. This indicates that, despite the dust in the atmosphere, which varies significantly depending on the seasons, the sky at this time was clear enough to take such distant images.