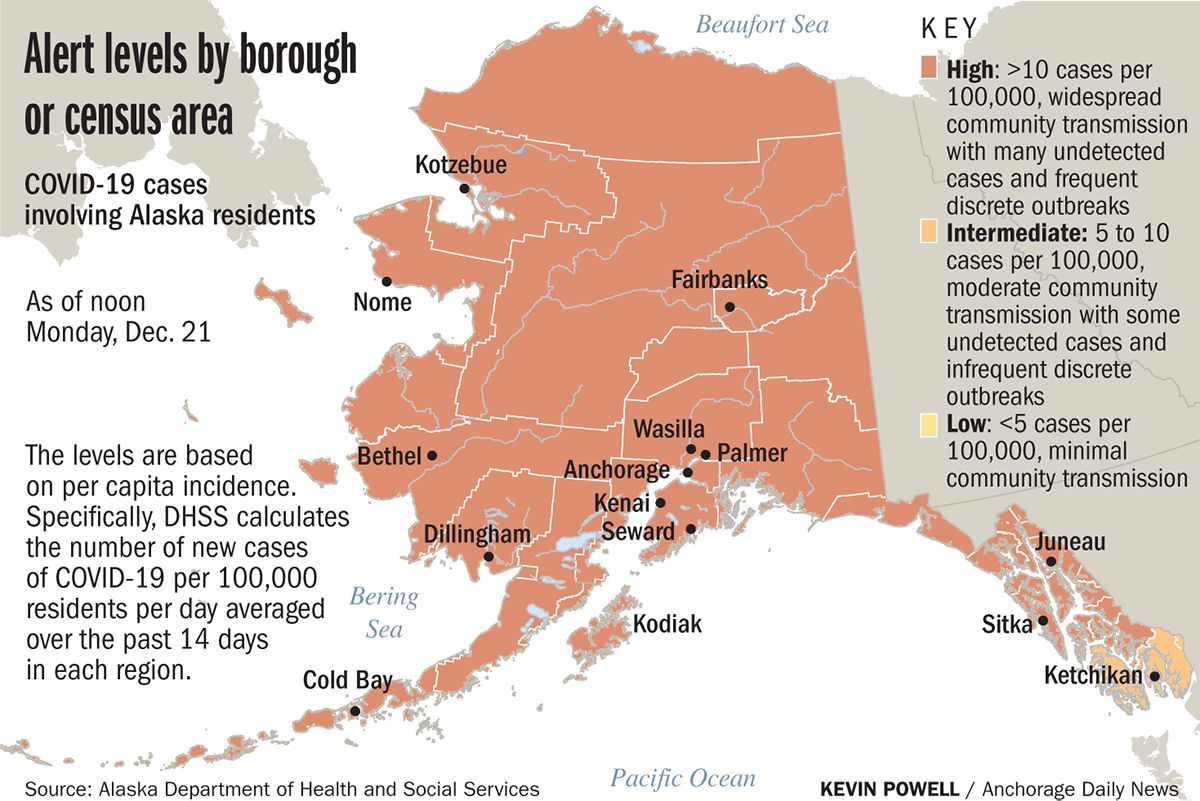 We provide this important information without a subscription as a public service. But we depend on the support of readers to do this work. Please consider supporting freelance journalism in Alaska, at just $ 1.99 for the first month of subscription.

Health officials, who attribute some of the drop in cases to Anchorage’s “hunker down” order in effect during the month, are urging Alaska to avoid gathering with people outside their households during the holidays.

The state Department of Health has asked residents to gather safely this season so that we do not overwhelm the Alaska health care system and be able to be together next year, in a guide announced Monday. “A safe and effective COVID-19 vaccine is coming soon, but we need to be vigilant this winter.”

As of Monday, there were 107 people with COVID-19 in Alaska hospitals and four more in hospital with suspected cases. Statewide, 39 intensive care beds have been available out of 122 since Monday.

In Anchorage hospitals, where the sickest patients are often treated, less than 25% of all beds remained open on Monday, or 14 intensive care beds available for adults out of 65

A total of 183 Alaskans and one non-resident with COVID-19 have died since the pandemic began here in March. Alaska’s overall per capita mortality rate is among the lowest in the country, but officials say the state’s vast geography and vulnerable health care system make it difficult to compare to other states.

Alaska began a statewide vaccination effort, receiving more than 35,000 doses of Pfizer vaccine last week. The additional vaccine is expected to be available from Moderna.

Hundreds of health workers, emergency workers and residents of staff and long-term care staff are currently eligible for vaccination, but health officials say the general public will probably not have access until spring or summer. Health officials continue to recommend basic disease prevention practices, including wearing a mask, social distancing and hand washing.

Of the 150 cases reported Monday in Alaska, there were 83 in Anchorage plus four in the Eagle River; four in Homer, one in Nikiski and four in Soldotna; three in Kodiak; six at Fairbanks and seven at the North Pole; two in Delta Junction; one in Houston, three in Palmer and six in Wasilla; one in Nome; one in Utqiagvik; one in Juneau; one in Sitka; six at Bethel; and one in Chevak.

Among the communities of less than 1,000 people who were not named to protect privacy, there were two in the Bethel census area and 13 in the Kusilvak census area.

There have also been two cases among non-residents currently living in Alaska, including one in Anchorage and one in an unidentified community.

While people could be tested multiple times, each case reported by the state health department represents just one person.

It is not clear how many people who tested positive for the virus showed symptoms. The Centers for Disease Control estimates that about one-third of people with COVID-19 are asymptomatic.

The national test positivity rate on Monday was 4.47% compared to the 7-day average. Health experts say that any more than 5% may indicate inadequate testing and potentially widespread community transmission. The state reached a peak of more than 9% in mid-November.