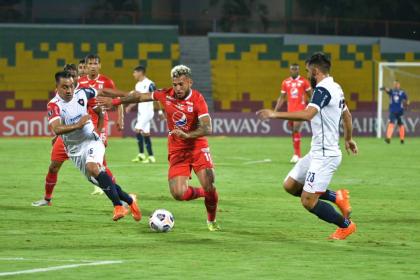 América de Cali had a pale debut this Wednesday in Group H of the Copa Libertadores when they lost 0-2 at home against Cerro Porteño, from Paraguay, at the Alfonso López Stadium, in Bucaramanga.

Anecdotally, it is the same result of the first meeting of the continental tournament last year, when the Reds lost to Gremio, from Porto Alegre, to Pascual Guerrero.

For FUTBOLRED, here are the details that framed the defeat of the Colombian champion in his debut in the Conmebol contest:

He did not know how to solve the rival’s strategy: Francisco Arce certainly reviewed the videos of the BetPlay I League in which America suffered with Medellín, Millonarios and Equidad, because he took a similar approach, blocked Juan Cruz Real and took an important prey for Paraguay.

With two impregnable blocks, he did not suffer the game despite the possession of his rival, but in the key moments he scored two vital goals to ensure an important victory outside his territory. His touches and short transitions were lethal to bridge a seemingly fragile gap.

Time passed and the Argentine coach could not return Arce’s board. Defeat that worries in the middle of a series of mistakes that came from the bank.

Permeable and unreacted defense: Playing with Pablo Ortiz as a left-back gives up the opportunity to open his arm to attack, but also by natural position, he tends to throw himself in the center and provides space for the attacker who is outlined there.

This time it was not an exception and Robert Morales took the opportunity to score the first goal. Then there was an advantage in a transition from Mateus Goncalves, and Ángel Cardozo punished the slowness and lack of reaction after the return of Joel Graterol.

The “devils” were very bad when they returned, their pressure was weak and they gave a lot of space to the “Guaraní” distribution, especially in the two gaps.

He collided and returned with that double visitor block: Cerro Porteño showed a higher hierarchy throughout the commitment, was well in isolation and caused the scarlet heads to sink in his few attempts. Mathías Villasanti and Claudio Aquino showed firmness and did not allow America to generate play in the middle.

Possession without prejudice: Having the ball is useless if it is not used in the opponent’s goal. That’s what America did, which kept the ball throughout the game without being deep, creating very few opportunities in the portico of the Brazilian Jean Fernandes, who was practically not required.

On the contrary, what Cerro Porteño did, who, in addition to finishing 6 times without beating more often, scored two goals in the key moments.

Very bad in attack: Important and experienced players such as Yesus Cabrera, Rafael Carrascal, Duván Vergara, as well as the young Santiago Moreno were expected to be able to take advantage of their ability to unbalance the Paraguayan team’s fierce defense at ground level, but the physical game between them.

The visitors’ equalizer seemed sure to come after 80 minutes, following a one on one situation around the left hand side of the goal area, but Moreno got the best of it, blocking the shot from Gustavo Murillo. he left Yesus Cabrera, who had two players in the lead.

Played despair: Juan Cruz Real didn’t pace himself at all, and after a series of daring offensive runs he was too tired to help out in the defensive play. However, Cerro Porteño did not manage to connect with it, as his team mates had hoped, and the ball went out. finally evacuated.

The changes were delayed and did not provide a solution: The need for victory was the Colombian champion, who, although at a disadvantage, had no reaction from the bench. He entered the Peruvian Aldaír Rodríguez at the age of 57, but the striker is still far from the goal, and the entries of Héctor Quiñones and Guillermo Murillo at 69 did not serve to change a dark panorama in the game against Cerro.