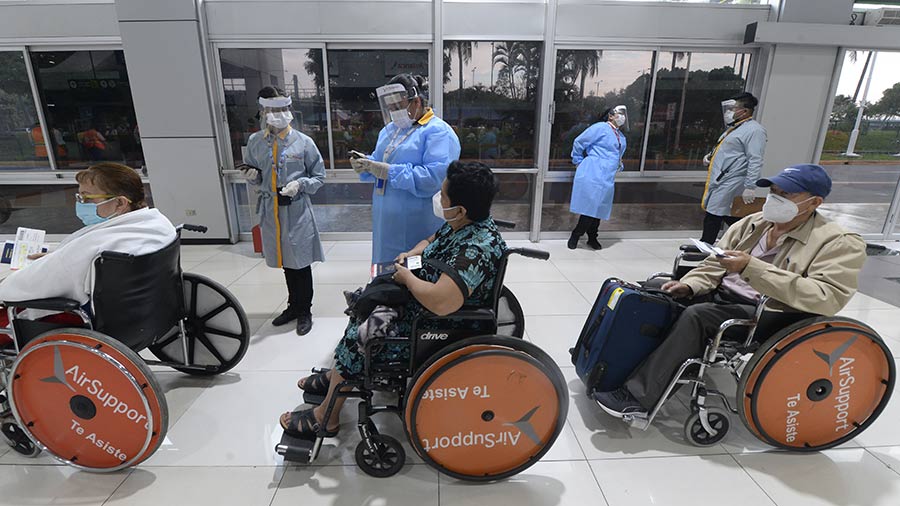 President Nayib Bukele reported that he was late on his Twitter account that, due to infections caused by the new strain of SARS-CoV-2 in the United Kingdom and South Africa, he banned flights from those countries and asked Salvadorans in Europe. Return to El Salvador in the next few weeks “before” new restrictions are imposed. “

Before Bukele’s publications and the press conference held by the Health Cabinet, there are some doubts:

So far, only the restriction of flights from the United Kingdom and South Africa is known, including people who have been to those nations.

“From now on, it is forbidden to enter our country, anyone whose flight itinerary has included the United Kingdom or South Africa or who has been in either of these two countries in the last 30 days,” the agent wrote in a tweet.

However, in a press conference held this Sunday afternoon, the presidential commissioner, Carolina Recinos, assured that she does not “refuse the entry of any Salvadoran”, but “denies the entry of flights coming from these countries”.

No other restrictions are known so far.

Given this comment, another question arises, what will happen to Salvadorans who are currently in these countries?

Bukele commented: “Salvadorans who are in Europe and who want to return to El Salvador in the coming weeks are advised to speed up their travel itineraries as much as possible.”

Given this, it can be believed that Salvadorans will be blocked, as happened a few months ago, when Monseñor Romero International Airport was closed, and that compatriots who decide to return will have to be in a solitary confinement center. However, the authorities did not mention any options or repatriation plans for Salvadorans in Europe.

Instead, Recinos said that any inconvenience people have, those responsible for solving it are the airlines.

“If those brothers have difficulties, they will have to do it with the airlines,” he said.

What is the legal protection that the Government has to exercise this provision?

Both Recinos and Health Minister Francisco Alabí were questioned about the documentation or legal instrument that gives the government the power to restrict flights, block lifeguards or prevent them from entering, but none of the officials responded. question.

In September last year, the Constitutional Chamber of the Supreme Court of Justice (SCJ) ruled that “No authority may refuse the entry into the territory of Salvadorans who, on arrival at San Óscar Arnulfo Romero and Galdámez International Airport, or at any other point authorized to from abroad, do not present PCR that tests negative for COVID-19, as this would in practice imply a ban on entry into the country. “

The magistrates in Salt also warned that “banning the entry of Salvadorans and permanent residents in the terms explained, in case of materialization, would violate the precautionary measure mentioned above and therefore will have no effect.”

Why was the decision made?

Bukele’s decision came after several European countries began banning flights from the United Kingdom on Sunday, after the discovery of a more contagious variant of the coronavirus that spread “out of control” in that country and before which the WHO called for “Tighten orders” “.

What about the new strain?

According to international media, British government scientists have identified 17 linked mutations in the virus’s genetic code that make him suspect that this newly discovered strain is more infectious and spreads more easily.

The scientific director of the government, Patrick Vallance, indicated that the strain – known as VUI 202012/01 – could have originated in London or Kent (south-east of England) in September.