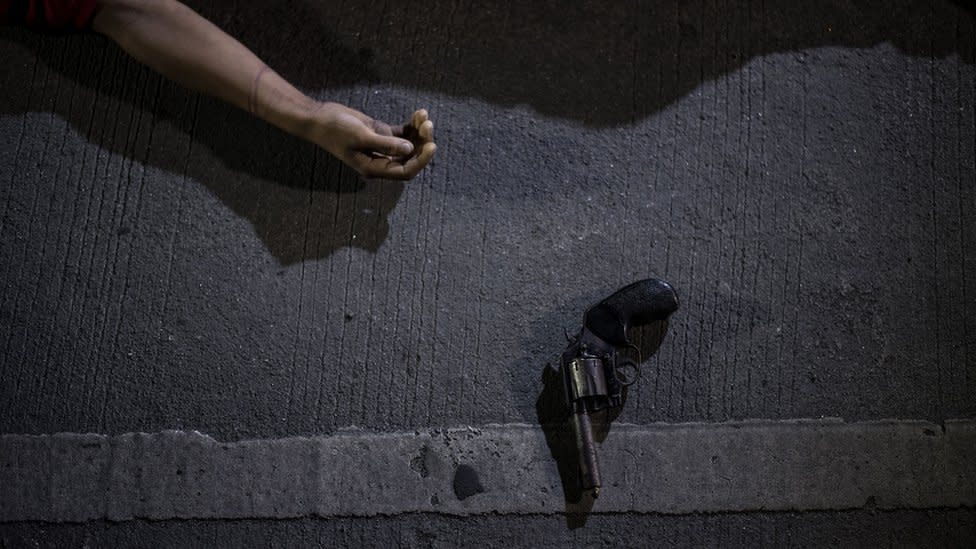 A Philippine police officer has been arrested and charged with the double murder of a mother and her son following a dispute.

Jonel Nuezca surrendered on Sunday after being accused of shooting his neighbor Sonya Gregario, 52, and her son, Frank, 25.

A video, distributed on social networks, shows him throwing another bullet at Mrs. Gregario while lying on the ground.

The killings provoked a shout-out and called for the renewal of police reform.

Mr. Nuezca, who was accompanied by his daughter at the time, did not publicly comment on the incident. Local police chief Noriel Rombaoa told local broadcaster DZMM that he acknowledged the killing.

The shooting took place in the town of Tarlac, while Mr. Nuezca, who was out of work, tried to arrest Mr. Gregario.

Initial media reports said a fight began after Mr Gregario fired an air cannon, made of PVC pipe, which made a loud noise. This was followed by a heated argument over the cannon and an ongoing land dispute between the two families.

As Mrs. Gregario wrapped her arms around her son to prevent him from being taken, the video appears to show Mr. Nuezca shooting her in the head before doing the same to Frank.

Alyssa Calosing, who said she recorded the video, told DZMM that other witnesses said they saw Mr. Nuezca beating Gregario before filming began.

She claimed that after shooting the pair at a distance, Mr Nuezca took his daughter and “left as if it were nothing”.

“I felt numb, as if my soul had left my body,” said Ms. Calosing. “Then, when I felt something moving, I started to get angry and cry.”

Debold Sinas, the head of the Philippine National Police, told local media that Nuezca has already faced five administrative charges, including two for murder, although both have been fired for lack of evidence. Mr. Nuezca was still allowed to carry a weapon during his service.

Since the video appeared online, various hashtags have been trending on social media, demanding justice.

Eduardo Año, the interior minister of the Philippines, condemned the crimes and stressed that the incident was isolated.

Earlier this year, a UN report found that more than 8,000 people had been killed by police since President Rodrigo Duterte took office in 2016.

The international body, along with human rights groups, accused him of giving impunity to the police during his war on illegal drugs.

Duterte’s administration has denied allegations of iniquity, and the president remains popular in the country.